“Deep Canvassing” and the Lessons Political Campaigns Can Learn From It

Deep Canvassing has grown in popularity as an organizing tool in the past few years, but while most people have heard of it, many are still unsure exactly what it is. The fundamentals behind deep canvassing are not new, in fact, organizing has always been based on the simple underlying belief that human conversations have the power to change minds and spur action.

The modern form of deep canvassing was developed by the Leadership LAB of the Los Angeles LGBT Center. Their Project Director, Dave Fleisher, describes it saying,

“In a conventional canvass, campaigns try to control the message by sending volunteers out with a script to recite exactly as written. There’s this belief that if we just say the right words, the voter’s going to change their mind. With a deep canvass, we want to figure out what’s relevant to voters. There’s still a script, but it’s designed to help the canvasser build a good rapport with a voter. The distinguishing feature of a deep canvass is you take a lot more time to talk to voters and have a bona fide two-way conversation about real experiences that shape their thinking about the issues. Instead of a script that lasts 60 seconds, volunteers spend 10 or 20 minutes talking with each voter.”

While deep canvassing has primarily been used on issue-based campaigns, such as ballot measures for LGBT issues like gay marriage and transgender equality, many of the techniques and principles can be adopted to deepen the organizing practice of electoral campaigns as well.

1. Build connections on the doors

Every good organizer knows that building connections is the secret to developing an energized volunteer base for a campaign, and it’s important to remember that this principle can apply to everyone that a campaign interacts with. Deep canvassing encourages canvassers to prioritize building a connection with each voter they engage with, going deeper than a simple candidate or issue ID. Creating real connections makes voters more likely to remember the conversations they have with canvassers or phone bankers and take action based on them.

Part of building a connection with voters means practicing active listening. Fully concentrating on what a voter is saying, leaving space for a voter to pause and think before responding (without immediately jumping in to fill the silence), asking follow-up questions, and displaying engaged body language are all important listening techniques that create more meaningful conversations on the doors. If a voter spends more time talking during a conversation than a canvasser does, you’re doing it right!

No one likes being treated as a checkbox on a list, and when a voter takes the time to talk to a canvasser at their door it’s because they care about the political issues at hand. Moving beyond simple yes or no questions and prompting voters to share the things that they care about and the reasons behind their positions shows that your campaign is invested in their wellbeing, not just their vote. Asking follow-up questions assures voters that you are actually interested in what they have to say, and can give organizers insight into effective ways to motivate and activate them.

The goal of a canvass is to prompt voters to take action, whether it be voting, volunteering, becoming a caucus leader, or talking to their other household members about voting. People take action because they care about something, so use canvass conversations to find out what is important to individual voters. Knowing the values that a voter holds, such as safety, community, justice, or fairness, can help you communicate your candidate's positions in a way that is relevant and impactful to them.

5. Don’t be afraid of the hard questions

Having real conversations about politics means that sometimes tough issues will come up. Many communities in the country today are facing sharply divided political landscapes and evaluating hard questions about the future. Canvass conversations are effective when, rather than shying away from these issues, they are addressed head on, through the lens of shared values. What are the issues that a voter is considering when making a candidate decision, and which decision is ultimately more aligned with their values?

Most people don't like being told what to do or what to think, and so rather than telling someone what the right answer is, asking voters to consider these questions for themselves can be a powerful tool for persuasion. The goal of deep canvass conversations is not to directly tell people how to vote, but rather to help walk them through the reasoning process of determining which candidate's positions align best with their values. Using this process can help a voter truly connect with their motivation for political involvement, something that ideally will stay with them through election day.

Are you still tracking your canvass results on paper? It's time to update your process, make canvassing easier, and eliminate data entry - for free: 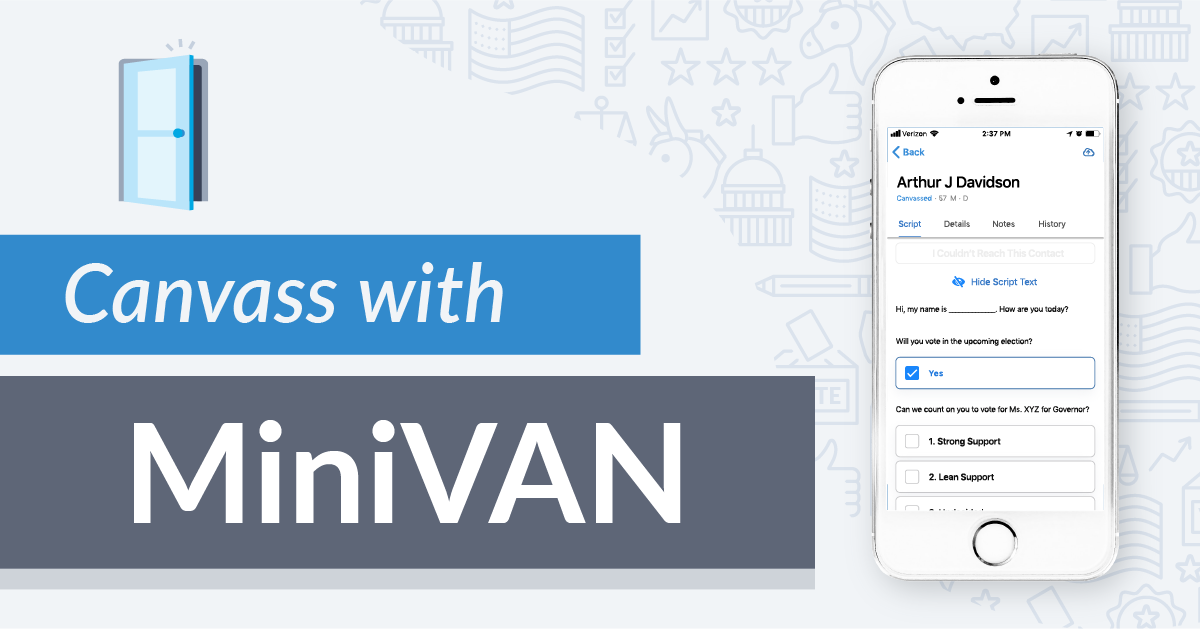 The Author: Gabby is a Political Marketing Strategist at NGP VAN.